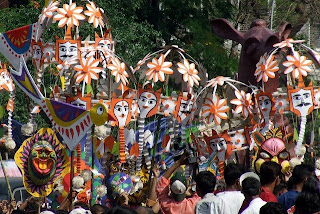 Pohela Boishakh is the first day of the Bengali calendar, celebrated in both Bangladesh and West Bengal, and in Bengali communities in Assam and Tripura. Pohela Boishakh connects all ethnic Bengalis irrespective of religious and regional differences. It falls on April 14 or April 15 of the Gregorian calendar depending on the use of the new amended or the old Bengali calendar respectively. In Bangladesh, it is celebrated on April 14 according to the official amended calendar designed by the Bangla Academy. In Bangladesh, Pohela Boishakh is a national holiday and in West Bengal and Assam it is a public (state) holiday.

The Hindu solar calendar based on the Surya Siddhanta commences in mid-April of the Gregorian year. The first day of this calendar is celebrated as the traditional New Year in various parts of South Asia, including Assam, Bengal, Kerala, Manipur, Nepal, Orissa, Punjab, Tamil Nadu and Tripura. It is also celebrated as the traditional New Year across Southeast Asia, including Cambodia, Laos, Myanmar, and Thailand (see Songkran).

Under the Mughals, agricultural taxes were collected according to the Hijri calendar. However, as the Hijri calendar is a purely lunar calendar, it does not coincide with the harvest. As a result, farmers were hard-pressed to pay taxes out of season. In order to streamline tax collection, the Mughal Emperor Akbar ordered a reform of the calendar. Accordingly, Fatehullah Shirazi, a renowned scholar and astronomer, formulated the Bengali year on the basis of the Hijri lunar and solar Hindu solar calendars. The new Fasli San (agricultural year) was introduced on 10/11 March 1584, but was dated from Akbar's ascension to the throne in 1556. The new year subsequently became known as Bônggabdo or Bengali year.

Celebrations of Pohela Boishakh started from Akbar's reign. It was customary to clear up all dues on the last day of Choitro. On the next day, or the first day of the new year, landlords would entertain their tenants with sweets. On this occasion there used to be fairs and other festivities. In due course the occasion became part of domestic and social life, and turned into a day of merriment. The main event of the day was to open a halkhata or new book of accounts. This was wholly a financial affair. In villages, towns and cities, traders and businessmen closed their old account books and opened new ones. They used to invite their customers to share sweets and renew their business relationship with them. This tradition is still practised, especially by jewellers.

In Kolkata, Pohela Boishakh (and indeed the entire month of Boishakh) is considered to be an auspicious time for marriages. This day people wear new clothes and go about socialising. Choitro, the last month of the previous year, is the month of hectic activities and frantic purchases. Garment traders organize a Choitro sale and sell the garments with heavy discounts.

Pohela Boishakh is the day for cultural programmes. Prayers are offered for the well-being and prosperity of the family. Young ladies clad in white saris with red borders and men clad in dhuti and kurta take part in the Probhat Pheri processions early in the morning to welcome the first day of the year.

This day being auspicious, new businesses and new ventures are started. The Mahurat is performed, marking the beginning of new ventures.

Pohela Boishakh is the beginning of all business activities in Bengal. The traders purchase new accounting books called halkhata. The accounting in the halkhata begins only after offering puja. Mantras are chanted and স্বস্তিক shostik ("Hindu swastika") are drawn on the accounting book by the priests. Long queues of devotees are seen in front of the Kalighat temple from late night. Devotees offer puja to receive the blessings of the almighty.

On Pohela Boishakh various fairs are held in West Bengal. The most famous of these is Bangla Sangit Mela, held at Nandan-Rabindra Sadan ground. This fair is conducted by the Government of West Bengal. New Year's festivities are closely linked with rural life in Bengal. Usually on Pohela Boishakh, the home is thoroughly scrubbed and cleaned; people bathe early in the morning and dress in fine clothes. They spend much of the day visiting relatives, friends, and neighbours. Special foods are prepared to entertain guests. This is one rural festival that has become enormously big in the cities, especially in Dhaka.

Boishakhi fairs are arranged in many parts of the country. Various agricultural products, traditional handicrafts, toys, cosmetics, as well as various kinds of food and sweets are sold at these fairs. The fairs also provide entertainment, with singers and dancers staging jatra (traditional plays), pala gan, kobigan, jarigan, gambhira gan, gazir gan and alkap gan. They present folk songs as well as baul, marfati, murshidi and bhatiali songs. Narrative plays like Laila-Majnu, Yusuf-Zulekha and Radha-Krishna are staged. Among other attractions of these fairs are puppet shows and merry-go-rounds.

Many old festivals connected with New Year's Day have disappeared, while new festivals have been added. With the abolition of the zamindari system, the punya connected with the closing of land revenue accounts has disappeared. Kite flying in Dhaka and bull racing in Munshiganj used to be very colourful events. Other popular village games and sports were horse races, bullfights, cockfights, flying pigeons, and boat racing. Some festivals, however, continue to be observed; for example, bali (wrestling) in Chittagong and gambhira in Rajshahi are still popular events.

Observance of Pohela Boishakh has become popular in the cities. Early in the morning, people gather under a big tree or on the bank of a lake to witness the sunrise. Artists present songs to usher in the new year. People from all walks of life wear traditional Bengali attire: young women wear white saris with red borders, and adorn themselves with churi bangles, ful flowers, and tip (bindis). Men wear white paejama (pants) or lungi(dhoti/dhuti) (long skirt) and kurta (tunic). Many townspeople start the day with the traditional breakfast of panta bhat (rice soaked in water), green chillies, onion, and fried hilsa fish.

The most colourful new year's day festival takes place in Dhaka. Large numbers of people gather early in the morning under the banyan tree at Ramna Park where Chhayanat artists open the day with Rabindranath Tagore's famous song, এসো, হে বৈশাখ, এসো এসো Esho, he Boishakh, Esho Esho (Come, O Boishakh, Come, Come). A similar ceremony welcoming the new year is also held at the Institute of Fine Arts, University of Dhaka. Students and teachers of the institute take out a colourful procession and parade round the campus. Social and cultural organisations celebrate the day with cultural programmes. Newspapers bring out special supplements. There are also special programmes on radio and television.

The historical importance of Pohela Boishakh in the Bangladeshi context may be dated from the observance of the day by Chhayanat in 1965. In an attempt to suppress Bengali culture, the Pakistani Government had banned poems written by Rabindranath Tagore, the most famous poet and writer in Bengali literature. Protesting this move, Chhayanat opened their Pohela Boishakh celebrations at Ramna Park with Tagore's song welcoming the month. The day continued to be celebrated in East Pakistan as a symbol of Bengali culture. After 1972 it became a national festival, a symbol of the Bangladesh nationalist movement and an integral part of the people's cultural heritage. Later, in the mid- 1980s the Institute of Fine Arts added colour to the day by initiating the Boishakhi parade, which is much like a carnival parade.

The punya or rajpunya is now observed only in the three figurative tribal kingdoms in Bangladesh - Rangamati, Bandarban and Khagrachori. In Rangamati, the principal town of Chittagong Hill Tracts and the seat for the Hill Administrative Council, three different ethnic minority groups have come together to merge their observance of Pohela Baishakh. Boisuk of Tripura people, Sangrai of Marma people and Biju of Chakma people have come together as BoiSaBi, a day of a wide variety of festivities. One of the more colorful activities of the day in the hills is the water festival of the Marma people.

Celebration in other countries

The Hindu communities in India, where the holiday is called Vaisakhi, also celebrate the beginning of Spring and the end of the harvest season on Pôhela Boishakh. The Sikh communities celebrate 'Vaisakhi because it is the birth of the Sikh order of the Khalsa. Vaisakhi is also called Rongali Bihu in Assam, Puthandu in Tamil Nadu and Pooram Vishu in Kerala.

In Buddhist communities, the month of Boishakh is associated with Vesak, known as Visakah Puja or Buddha Purnima in India, Visakha Bucha in Thailand, Waisak in Indonesia and Wesak in Sri Lanka and Malaysia. It commemorates the birth, Enlightenment and passing of Gautama Buddha on the one historical day, the first full moon day in May, except in a leap year when the festival is held in June. Although this festival is not held on the same day as Pohela Boishakh, the holidays typically fall in the same month (Boishakh) of the Bengali, Hindu, and Theravada Buddhist calendars, and are related historically through the spread of Hinduism and Buddhism in Southeast Asia.

Pohela Boishakh does, however, coincide with the New Years in many other calendars, including those of South India (Kerala, Tamil Nadu), Sri Lanka, Nepal, Eastern India (Assam, Manipur, Orissa), and Southeast Asia (Cambodia, Laos, Myanmar, Thailand).

In Australia, the Bengali new year is celebrated in various cities such as Melbourne and Canberra through Boi Shakhi Melas (fairs) where people gather to celebrate the culture of Bangladesh through dances, fashion shows, stalls of art, music, clothing, food and etc. However the largest celebration for the Bengali new year in Australia is the Sydney Boi Shakhi Mela which was traditionally held at the Burwood Girls High School but from 2006 has been held at the Homebush Stadium. It attracts large crowds and is a very anticipated event on the Australian Bengali community's calendar.