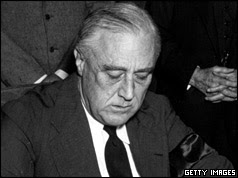 Three days ago, US President Franklin Roosevelt announced America was at war with Japan, the third Axis power, following the surprise attack on its naval base at Pearl Harbor.

Today Italian dictator, Benito Mussolini, made his declaration first - from the balcony over the Piazza Venezia in Rome - pledging the "powers of the pact of steel" were determined to win.

Then Adolf Hitler made his announcement at the Reichstag in Berlin saying he had tried to avoid direct conflict with the US but, under the Tripartite Agreement signed on 27 September 1940, Germany was obliged to join with Italy to defend its ally Japan.

"After victory has been achieved," he said. "Germany, Italy and Japan will continue in closest co-operation with a view to establishing a new and just order."

He accused President Roosevelt of waging a campaign against Germany since 1937, blamed him for the outbreak of war in 1939 and said he was planning to invade Germany in 1943.

Over in Washington, President Roosevelt told Congress the free world must act quickly and decisively against the enemy.

"The forces endeavouring to enslave the entire world now are moving towards this hemisphere.

"Delay invites danger. Rapid and united efforts by all peoples of the world who are determined to remain free will ensure world victory for the forces of justice and righteousness over the forces of savagery and barbarism."

Resolutions against Germany and Italy were passed without debate. The only person who did not vote for war was pacifist Congresswoman Jeannette Rankin who had also voted against war with Japan.

In the Senate the vote was unanimous.

Both Democrats and Republicans have agreed to "adjourn politics" for the duration of the war and focus on national defence.

They have passed a new law which allows US servicemen to fight anywhere in the world.

Following the shock of Pearl Harbor, American citizens are flocking to volunteer for the US Navy and Marine Corps which do not take conscripts.

The US Army has already grown tenfold since the draft was introduced last year.
Posted by ***world Business 1981*** at 5:39 AM