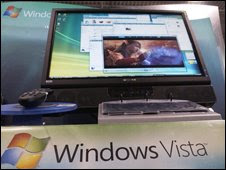 The new software, code-named Morro, will be a no-frills program suited to smaller and less powerful computers.

The software will be free to download and will support Windows XP, Vista and Windows 7.

The move comes as sales of the OneCare subscription service are flagging - reportedly because the anti-virus marketplace is already flooded with big-name players such as Symantec and McAfee.

Since its launch in May 2006, OneCare has garnered less than 2% of the security software market share.

In a statement, Microsoft said that Morro would be designed specifically to be a small-footprint program that uses fewer system resources. This, it said, would be ideal for users with low-bandwidth connections or computers without much processing power.

That will be of particular interest to consumers buying comparatively low-powered "netbook" computers.

Amy Barzdukas, senior director of product management in the online services division at Microsoft, said: "This new, no-cost offering will give us the ability to protect an even greater number of consumers, especially in markets where the growth of new PC purchases is outpaced only by the growth of malware."
Posted by ***world Business 1981*** at 4:18 AM